With OnlineGroups.net you have a site for your organisation. Your site can contain an unlimited number of groups. Each group is more than a listserv, it is also a place for your group on the web.

Each group gets a unique page. The group page has to serve three distinct categories of people: the administrators, the group members, and everyone else.

The group page has a few features that is useful to everyone. The first is the group name, which can be descriptive (like GroupServer development) or esoteric (such as Permolat). Either way it should mean something to potential members, otherwise they will have trouble finding the group.

The About box, at the top of the group page, is also important. It is a customised area that lets people know who the group is for, and why people chose to join the group. The About box allows HTML, so you can link to other pages in order to place the group in the wider context of the web.

For the group members

The messages area of a group shows the most recent topics.

The links in the About box can also be useful for the group members, but the list of messages is the most useful part of the group page for them. In most groups it presents two views of the archive:

(In announcement groups only a specialised Posts list is shown.) 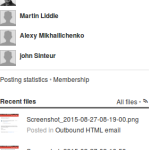 There is also some other information on the group page that is useful for the members. It is shown to the right of the page on the desktop, or below the messages on a small screen (such as a tablet or mobile).

The administration area of a group is separated in two: one area for administering the members, and one for the group itself.

2 Responses to “A page for your listserv”