One of the big advantages of a site with OnlineGroups.net over a normal listserv is that your site can have multiple groups, so it better suits the needs of your organisation and the group members. 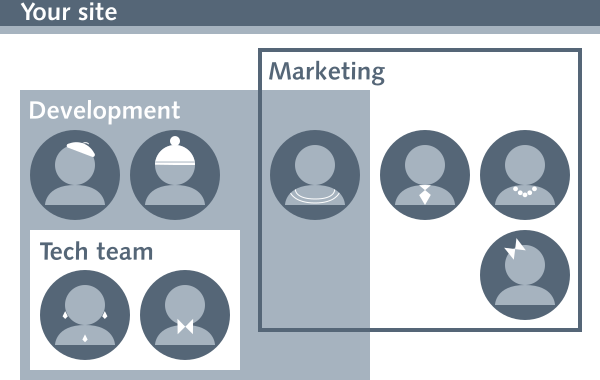 A site with three groups: Development, Tech team, and Marketing.

Not everyone in your organisation will be interested in the same things, while others will have overlapping interests. To support this OnlineGroups.net allows you to have unlimited multiple groups on your site. The diagram above shows how this will work with a site that has eight people in three groups.

With OnlineGroups.net you pay for the number of people on your site (eight in this case) rather than the number of groups. This means that small groups, such as Tech team, are effectively free. (Indeed, it is quite common for larger sites to have a small group for those people involved in running the site!)

Keeping track of what groups you are in is easy. Everyone gets their own customised profile page that lists all the groups they are in on the site, the site homepage shows the groups that they belong to, and once a month we send a customised summary of what is going on in all your groups.

The site homepage also summarises the recent activity in all the groups on a site. For example, the homepage of the Open New Zealand site summarises the activity in three groups: Cantage, GeoMash and Ninjas. This allows everyone to keep in the loop, even if they are members of different groups.

You control the visibility of your groups. OnlineGroups.net allows you limit access to just group members, or you can create a group where all the members of  your site can see the archive for each group without the burden of being a member of every group.

2 Responses to “A site with multiple groups”